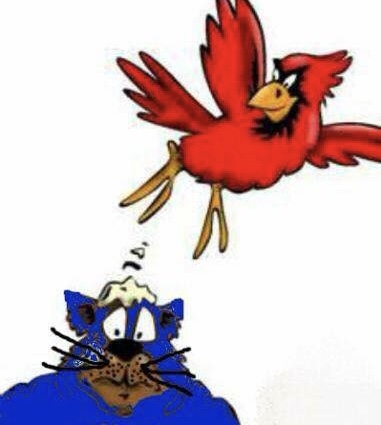 The Thanksgiving Day feast is over but the real treat for football fans in the state of Kentucky will happen on Saturday. The Governor’s Cup Battle was moved to November back in 2014 and has now established itself among some of college football’s best rivalries during this time of the year. This will be the 30th time the Cardinals and Cats meet on the gridiron with Kentucky holding the 15-14 advantage. The Cards have won the last 5 out of 6 and three straight at Kroger Field.

The series may be a little lopsided in recent history but the Rivalry between fans is just as fierce as it ever was. Interim AD Vince Tyra said earlier this week that he wanted to “Kick Their ass” when ask about the game on Saturday. I think that every Louisville fan would echo that sentiment. Especially the fans on social media who have had to endure an onslaught of insults towards our athletic department over the last few months. Kentucky fans have shown no mercy. I’m hoping for a big win in Lexington and I won’t show any mercy celebrating as those fans exit their stadium.

Winning a game in Lexington is getting harder to do these days. Coach Mark Stoops is recruiting decent talent now and has some guys with a winning attitude in that program. One of those guys is Senior QB Stephen Johnson. The Wildcats are 12-8 with him as a starter. This guy isn’t going to wow you with his ability, but he does know how to win and has five game winning drives during his career in Lexington. I watched that game against Tennessee and was really impressed by his will to win. He’s a gamer and has helped this Kentucky program take another step. His versatility will keep the Cardinals defense on their toes. He has 352 yards with 3 touchdowns on the ground and 1938 yards with 10 touchdowns thru the air. Johnson is a kid that won’t lay down on Senior Day.

Kentucky has a balanced attack overall with 2087 yards on the ground and 2063 yards thru the air. But the heart of their offense is the running game with Benny Snell. He is second in the SEC with 1107 yards on the ground this season and is seventh in the nation with 16 touchdowns. He is a beast averaging 5 yards a carry. Talk about a gamer… There is no quit in Benny Snell. Point of impact will be crucial for the Louisville defensive front on Saturday. You won’t stop Snell, but you can slow him down. The Cardinals will have to slow him down if they want to bring the Cup home.

I’m not as concerned with the Wildcats Receiving corps… There is some talent there, but they are very inconsistent. Senior WR Garrett Johnson is the heart of this group with 2050 yards receiving on the season. He is the biggest deep threat receiver with six catches of +40 in his career while averaging about 14 yards a play. He and Senior WR Blake Bone will be the biggest challenge for the Louisville secondary. Bone has 234 yards on the season with two touchdown grabs. He averages almost 20 yards a catch. If the Louisville secondary plays like they have been they shouldn’t have a problem with the Kentucky air attack.

The Louisville defense shouldn’t see anything that surprises them on Saturday. Over the last couple of weeks, the Louisville defense has come to life allowing just 130 rushing and 176 yards receiving over the last two games. I think the return of Jaire Alexander and a better understanding of what their coach wants them to do is the reason for this end of the season surge. Point of impact will be a big key in stopping the Kentucky offense. D-lineman Trevon Young, James Hearns, and Johnathan Greenard will be the guys for that task. This trio has combined for 35 tackles for loss and 15 sacks this season.

The Cardinals have some freshman standouts who have helped turn things around on the defense. LB Dorian Etheridge leads the team with 69 tackles, and Russ Yeast son of Kentucky legend Craig Yeast has 20 tackles this season. I think he’ll have some extra incentive on Saturday. This Louisville defense has been getting off the field on third downs. It will be important to do that early in this game to negate the home field momentum. I like where this defense is and a few weeks ago I wouldn’t have said that. I also think they are much better than they were a year ago.

Talk about better than they were a year ago the Louisville offense is firing on all cylinders. Lamar Jackson has evolved, and I don’t think the Kentucky defense will see many ill-advised decisions with the ball or any last-minute fumbles from Jackson on Saturday. Last season at this point the Louisville offense had become so one dimensional that it didn’t take much to figure it out. That led to Jackson trying to do too much and an upset. The Kentucky defense will face a better Lamar Jackson and a multi-level attack that features some very good players.

The Cardinals have been an offensive unit by committee this season with 12 different players scoring at least one touchdown. Including seven different players with a receiving touchdown. It’s hard to beat Bobby Petrino but becomes really hard when he can run the ball. He will come to Lexington with a healthy group. Malik Williams and Dae Williams have been game changers. Dae has been brought in to get those tough yards and Malik had a career high 180 yards his last time out. I think both guys will be key Saturday along with the Louisville wide receivers.

The Louisville defense is playing their best ball of the season while the Kentucky defensive unit seems to be heading in the other direction. They are ranked 76th in 3rd down conversion defense and have had trouble getting off the field especially in late game situations. This is where I think having guys like Dae Williams and Malik Williams will be effective for our Cardinals. The strength of the Kentucky defense is in their defensive backfield with Safety Mike Edwards who leads them with 84 tackles this season and their DE/LB duo of Josh Allen and Denzil Ware. Allen and Ware have combined for 223 tackles, 36 tackles for loss and 24 sacks. Balancing the run and pass attack will be important in this game. The Cardinals offensive line will have to neutralize these guys for that to happen.

These rivalry games are always hard to predict but I do like the Cardinals chances heading into this one. The Cardinals are playing their best football of the season while this Kentucky team seems to have peaked early. Kentucky will see a better offense this season and in the end I don’t think they have an answer for that. But they do have enough offense to keep up if the Louisville defense doesn’t show up. It will take a total team effort, but I think the Cardinals pull out the win. My Turkey Holiday has been great but will be a lot better if Louisville can get the Cup back. I want to kick their ass… Enjoy the game folks! Go Cards!